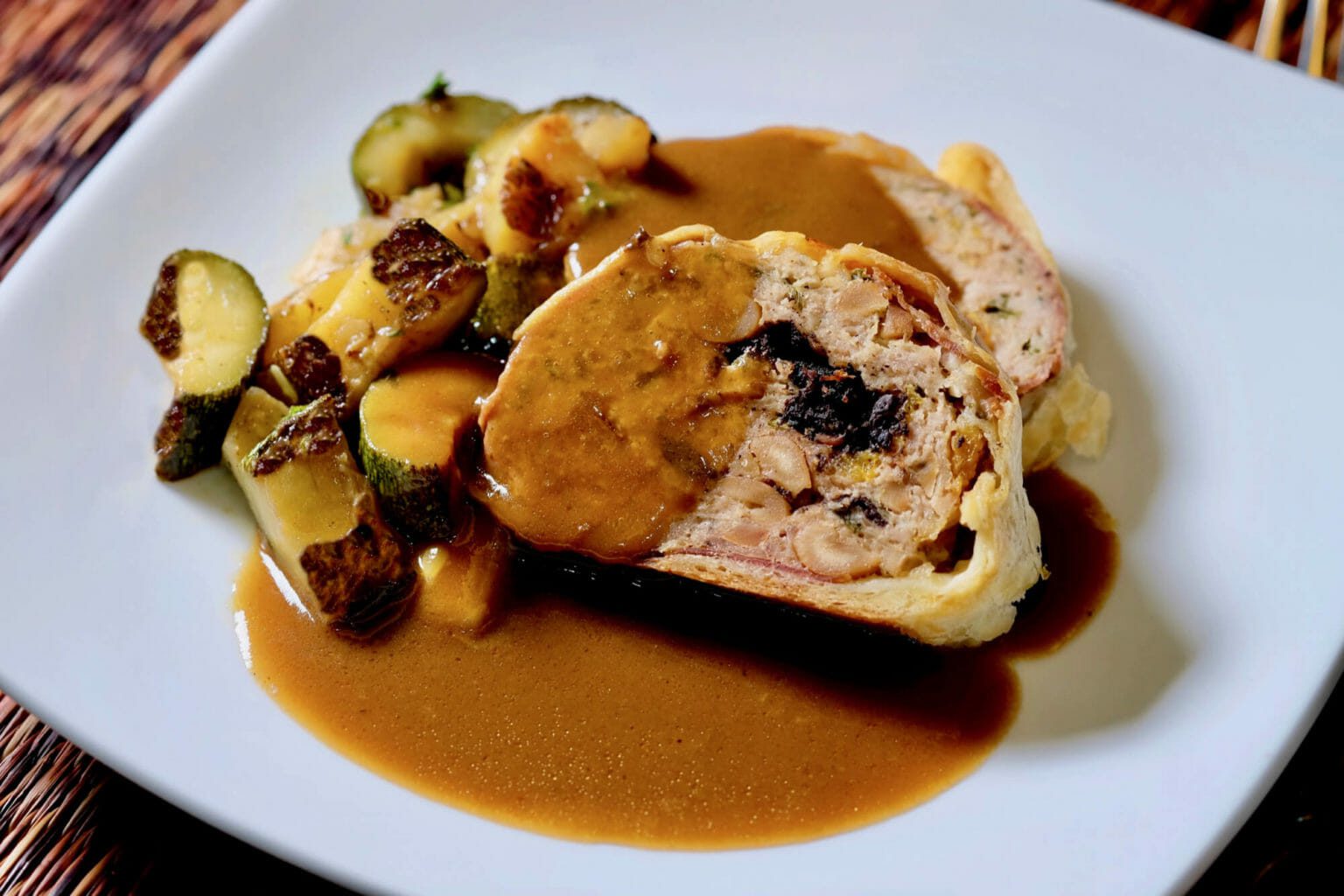 An upgrade of the classic, pastry encased UK style giant sausage roll. The pastry is still there, but the sausage filling is transformed by adding cashew nuts, apricots, ginger, and black pudding. Pork benefits from a fruity counterpoint, provided here by the charred zucchini and apple. And the mushroom Marmite gravy brings it all together.

I have this thing about UK style sausage rolls. One of those childhood legacies, I guess. If there is a sausage roll in the vicinity, I have to try it, hoping that it is as good as those I “remember” from long ago. Admittedly I am usually very disappointed, but that doesn’t appear to diminish the urge the next time.

This recipe tries to raise the bar and deliver a sausage roll that is anything but disappointing. Indeed, it is delectable. The complexity provided by the apricots, nuts, ginger, and black pudding, as well as the encasing prosciutto, elevated this sausage roll to such heights that I think I can finally to move on from that long-standing search for the ultimate example of this classic comfort food.

Of course, this dish is much more than the giant sausage roll, as amazing as it is. Pork, the only animal protein in this sausage roll, responds wonderfully to a fruity accompaniment. The apple and zucchini, charred yet still a little crunchy, provide that perfectly aligned accompaniment.

And then there is the mushroom Marmite gravy – the integrating component. Traditionally gravies are made from the remnants of cooking meat. This gravy is vegetarian, made with mushrooms, Marmite, and vegetable stock. It is so delicious and really gives meat-based gravies some serious competition. It also worked beautifully with these Lentil Stout and Mushroom Turnovers.

Course: Main Course
Cuisine: English, New Zealand
Keyword: gravy, Marmite, sausage roll
Servings: 6 people
Author: Steve Paris
An upgrade of the classic, pastry encased, UK style giant sausage roll. The pastry is still there, but the sausage filling is transformed by the addition of cashew nuts, apricots, ginger, and black pudding. Pork benefits from a fruity counterpoint, provided here by the charred zucchini and apple. And the mushroom Marmite gravy brings it all together.
Print Recipe
Prevent your screen from going dark