In Barcelona, a grilled eggplant flatbread would be known as coca. It’s also a close relative to the pizza. Adding XO sauce may not be typical of Catalan or Italian cuisine, but it works, contributing both complexity and heat.

The coca is a little like a pizza but seldom has cheese or tomato as a topping. Typical coca toppings include eggplant and red peppers, onions and raisins, spinach and pine nuts, cured anchovies, or wild mushrooms and herbs. The addition of XO sauce to this grilled eggplant flatbread really lifts it to another level in complexity and heat.

Adding a Cantonese ingredient to a Catalan dish may seem… inappropriate? However, if flavours work together, why not? The origin of those flavours is very much a secondary consideration. Many of the worlds classic dishes are a fusion of elements from different regions. If you like the taste, it’s good.

That reminds me of a lecture on modern art by Arthur Baysting that I attended many years ago. His advice regarding modern art was, “if you like it, it’s good.”

XO sauce is a Cantonese condiment originating in Hong Kong in the 1980s. It is really more of a relish than a sauce. XO sauce was named after XO cognac. Even so, it doesn’t actually contain any. In Hong Kong at the time, XO had become a generic term for high quality. This delicious relish contains dried shrimps and scallops, red chillis, ham, garlic and canola oil. In short, jam-packed with umami.

I bought my XO sauce from a local Cantonese restaurant. You will be able to find it at an Asian store or on Amazon. Or, you could make your own. XO sauce delivers a virtual explosion of flavour. While it can overpower more subtly flavoured dishes, when paired with the right ingredients, such as this grilled eggplant flatbread – it is culinary gold. Try it with soba and egg yolk, wrapped in a tortilla with duck, or a spring roll with chicken.

“We all eat, and it would be a sad waste of opportunity to eat badly.” 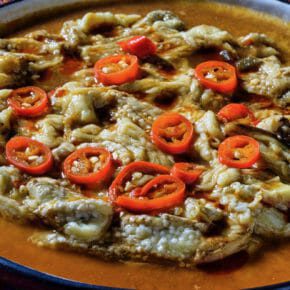 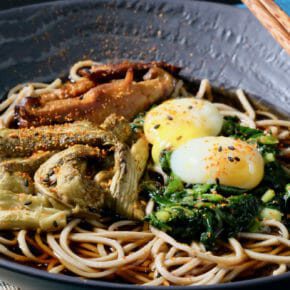 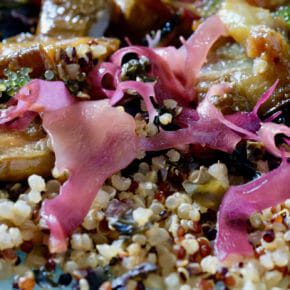 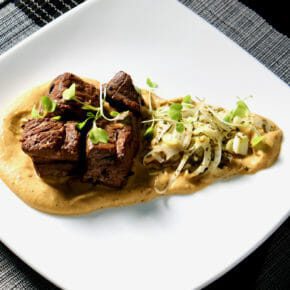