This is not the only cream of mushroom soup recipe on delectabilia. This recipe is simpler and arguably has a more interesting flavour. However, it relies on these very special mushrooms, which may not (yet) be easy to find in your locality. By “giant”, I mean about 10cm diameter. You could get a similar depth of flavour by using portobello mushrooms. Larger, more mature mushrooms do tend to have deeper flavours.

Shiitake mushrooms originate in East Asia. They are an important ingredient in Japanese, Chinese, Korean, and Vietnamese cuisines. They are often purchased in dried form and in that form are used in many delectabilia recipes. Dried shiitake mushrooms impart an amazing depth of flavour and umami components to dashi, stocks, and soups. But we digress. This soup uses fresh shiitake mushrooms. You may not find the giant variety that prompted me first to make this soup. The more common smaller fresh shiitake mushrooms also make a delicious soup. You may find them in larger supermarkets or an Asian market.

While their skin is the typical brown of the smaller shiitake mushrooms, there is a lot more white flesh inside the giant shiitake mushrooms. Hence the colour of this soup is near white, yet it has a distinct but mellow mushroom flavour. I served this cream of shiitake mushroom soup to quite a diverse group of guests, and it was a hit across cultures and ages. 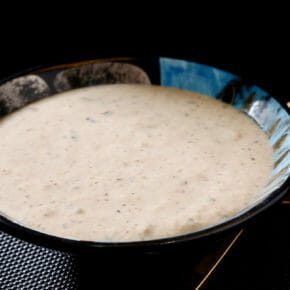