Inspired by the oyster poor boy (aka Po’Boy), these fried oyster sandwiches or sliders pack a briny, buttery beer-battered oyster and refreshing, spicy pickled fennel in a mini burger bun.

The inspiration for this fried oyster sandwich came during an episode from season 4 of the great food show, The Mind of a Chef, executive produced by Anthony Bourdain. The particular segment where chef David Kinch makes an oyster “poor boy” in New Orleans is available on YouTube. Kinch is the owner and executive chef at Manresa, an iconic Californian restaurant.

As things evolved, placing a fried oyster between two pieces of bread is about all this recipe has in common with the Kinch version. Rather than a panko crumb encasing the oyster, here we use a beer batter. It has its own unique crunch, one that I prefer. The batter is not just about the texture but contributes a taste of its own. The bubbles from the beer help make a great crisp batter, but the taste of the beer is just as important.

Fun fact: Have you ever wondered where the term “slider” came from? Here is Wikipedia’s explanation: “A slider is an American term for a steam-grilled sandwich, typically around 2 inches (5 cm) across, made with a bun.”

I wanted the batter to be more than just crispy packaging for the oyster. To do that, I needed a beer that brought its own distinct but complementary flavour. I selected an IPA made here in Saigon, appropriately named Kurtz’s Insane IPA.

Heart of Darkness’ biggest, hoppiest beer. A wonderfully vibrant beer, with grapefruit and piney tones, we’ve crammed in 7 kinds of hops which deliver a full-blown assault on your taste buds. This is a big, but beautifully balanced IPA, with a bright and fun bitter flavour – a true hop head’s delight.

A truly amazing beer. It has made other beers seem a little boring to me. Unfortunately, unless you live in one of the few countries they export to, you will need to find an alternative. And that is part of the fun. I certainly had fun with that selection process!

It is better to use a high alcohol beer. Kurtz’s Insane is 7.1%. The reason is that the alcohol evaporates off very quickly, resulting in a lighter, more crisp batter. Some cooks add vodka to a batter to get the same effect.

That crisp and light batter texture is also helped by ensuring the beer is icy cold before adding to the other ingredients. And that you keep the batter cold. The cold batter hitting the hot oil makes it even more crispy. That works for any fried fish dish, including fish and chips.

Fried oysters develop a wonderful buttery mouthfeel. That, together with the fact they are fried and retain some of the fat from that process, we need an acidic component to provide some balance. This comes from the spicy pickled fennel.

Not only is there some acid from the pickling process to balance the battered oyster, but the fennel also contributes its own special anise flavour. Not a common pairing, but it works so well. As did the mild bite of the chilli that was pickled along with the fennel.

What would an oyster burger, even a mini-burger, be without some sauce, or at least some mayo. I first used this katsuobushi yuzu kosho mayo in this kimchi chicken burger. That flavour enhancing combination works just as well in these beer-battered oysters and spicy pickled fennel sliders.

“I like a cook who smiles out loud when he tastes his own work.” 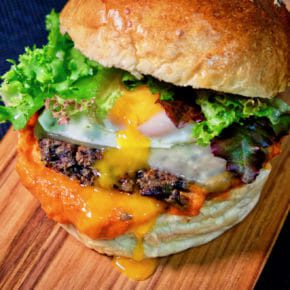 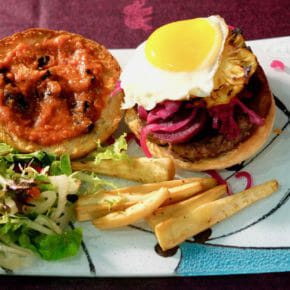 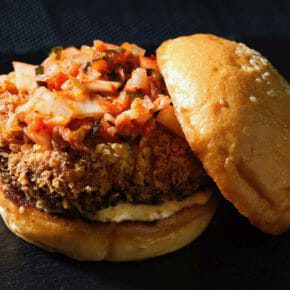