There is so much flavour packed into this red quinoa and black beans bake. And not only is it delicious, but it is also highly nutritious.

Not many recipes on delectabilia would be suitable to take along to a pot-luck dinner. This one, though, would be one to stand out in a crowd. Alternatively, it would be suitable for sectioning up and freezing for those week-nights that you crave something hearty and healthy.

The bulk in this dish comes from the quinoa and the black beans, both very high in fibre and vitamins and minerals. They do, however, need to be combined with some enhancing flavours. Not that they are tasteless, both make their own contributions to the flavours of this dish. But we need to use a few other ingredients to draw out their earthy flavours and highlight their qualities.

First are the dried mushrooms. Not only do mushrooms bring their own earthy character to this red quinoa and black bean bake, but the umami from dried mushrooms also enhances all the other flavours in the dish. The effect is like turning up the saturation setting in your photo editing software. The Science of Cooking site has a good piece on why dried shitake mushrooms can taste better than fresh. This Udon noodles in a mushroom curry broth is another recipe that is enhanced by the magic of dried mushrooms.

The corn adds a sweet character that only corn can do. The red peppers add a different kind of sweetness. The eggplant brings a savoury creaminess. The chillis add a little edge. And the feta brings some salt to work together with the umami to enhance all these beautiful flavours.

Do make extra black bean and quinoa bake so that you can freeze it for next time. It freezes well. De-frost and reheat it, serving with a fried or poached egg and a little bacon if you are not vegetarian. 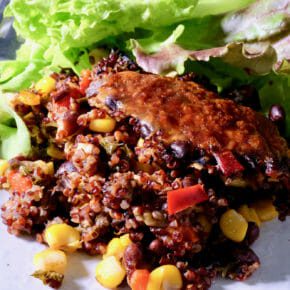 Course: Main Course
Cuisine: Mexican
Keyword: black beans, corn, eggplant, feta, mozarella, quinoa, red peppers
Servings: 6 people
Author: Steve Paris
There is so much flavour packed into this black bean and red quinoa bake. And not only is it delicious, but it is also so highly nutritious.
Print Recipe
Prevent your screen from going dark 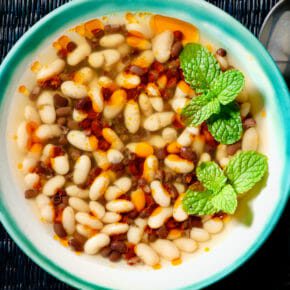 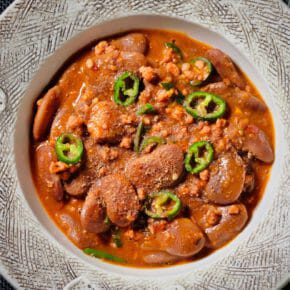 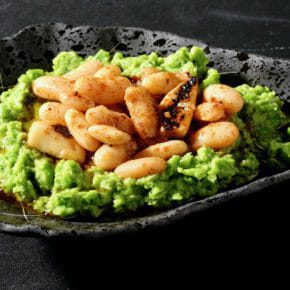 Smoky Marinated White Beans on a Pea and Herb Mash 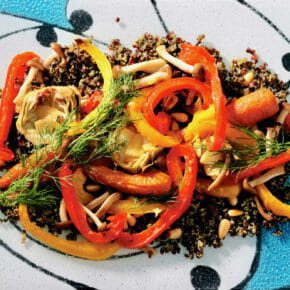 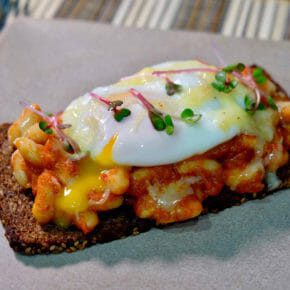